Previous / Next: Picture Gallery / Juania Australis - A first ever - and it's a girl!

To the north of the garden, the Hill of Howth provides important shelter from cold northerly winds. On the south side the land extends down to high watermark. This fortunate situation along with the influence of the warm North Atlantic drift is responsible for the favourable microclimate.

Air frosts occur regularly generally between early December and mid April. The lowest winter minimum is usually about -4º C but more severe frosts occur from time to time and we recorded low temperatures of -7.5º C in December 1995 and -7.0º C in December 2000. Freezing days, when the temperature does not rise above 0º C, are rare. Because of the proximity of the sea, summer temperatures are moderate, seldom exceeding 25º C. The absolute maximum recorded since 1969 was 28.9º C in July 2016, though this level of high temperature is very rare. Average annual rainfall is only 650 mm but this is spread fairly evenly throughout the year and periods of drought are rare.

Although rainfall is among the lowest in Ireland, the coastal location is responsible for relatively low daily maximum temperatures. Consequently drought is seldom a problem, the top soil remains relatively moist during the average growing season and trees and shrubs produce a preponderance of shallow, surface feeding roots.

The soil is derived from Cambrian shale and quartzite. These are hard rocks and have enabled the peninsula to withstand the eroding action of the sea for millions of years. Had the peninsula been derived from limestone like most of the rest of County Dublin it would have been washed away long ago. The soil in the garden contains approximately 25% clay and 4.5% organic matter in the top 8 cm. It is mostly acid to neutral (pH 5.0 - 6.5) in contrast to the alkalinity of most of County Dublin.

Under these conditions and with the help of many organisations such as the National Botanic Gardens Dublin, , the UK Royal Horticultural Society and 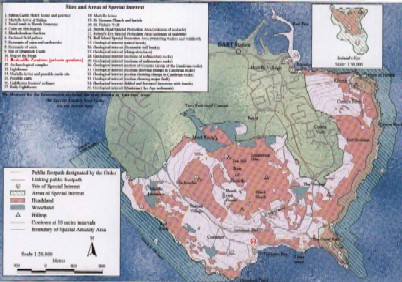 Fingal is an administrative area of County Dublin. The administrative area of Fingal is located to the north of the City of Dublin and extends in the west to the line of the River Liffey, to the east to the sea and to the north as far as the county boundary. It covers an area of approximately 173 square miles and has a population of almost 210,000 with growth projections to 260,000 by the year 2010.

In 1999 Fingal County Council recognised the exceptional character of the area of Howth by making the Howth Special Amenity Area Order. The Howth Order was confirmed by the minister on the 16th May 2000.

Fingal County Council have listed the garden at Earlscliffe by name as a site of special interest that has to be maintained under the Howth Special Amenity Area Order.

The following is taken from the Fingal County Council Site:

The site is also of scientific importance for its seabird colonies, invertebrates and lichens. It also supports populations of at least two legally protected plant species and several other scarce plants.

Rock outcrops which are important for lichens are distributed widely around Howth Head. The richest area for lichens appears to be around Balscadden quarries. In addition, the Earlscliffe area is of national importance for lichens and is the type locality for the black, yellow and grey lichen zonation.

Curved Hard-grass (Parapholis incurva), a species which had not previously been recognized as occurring in Ireland, was found at Red Rock in 1979.

The site is of national importance for breeding seabirds. A census in 1985-87 recorded the following numbers: Fulmar (105 pairs), Shags (25 pairs), Herring Gulls (70 pairs), Kittiwake (c.1,700 pairs), Guillemot (585 birds), Razorbill (280 birds). In 1990, 21 pairs of Black Guillemot were counted. Preregrine can also be found as well as Sparrowhawk and Kestrel. Howth Head is also good for seawatching (Shearwaters and Skuas) and the Head also throws up some interesting migrant passerines e.g. Pallas' Warbler recently.

A number of rare invertebrates have been recorded from the site: the insect Phaonia exoleta (Order Diptera) occurs in the woods at the back of Deerpark and has not been seen anywhere else in Ireland, while the ground beetle Trechus rubens (Order Coleoptera) is found on storm beaches on the eastern cliffs. A hoverfly, known from only a few Irish locations, Sphaerophoria batava (Order Diptera) is present in the heathland habitat within the site.

The main land use within the area is recreation, mostly walking and horse-riding, and this has led to some erosion within the site. Fires also pose a danger to the site. There may also be a threat in some areas from further housing development.

(Synopsis as described as Appendix C to the Strategic Environmental Assessment for the Dublin Airport Masterplan. Copyright belongs to the Minister for the Environment, Heritage and Local Government.)

Disclaimer. Parts of the data found in these history pages has been derived from sources currently available on the internet. In researching the previous owners of Earlscliffe, certain assumptions have been made as to the validity of this internet data. If you believe that some of this data is inaccurate, please contact .

For more details of the garden at Earlscliffe, see the following pages