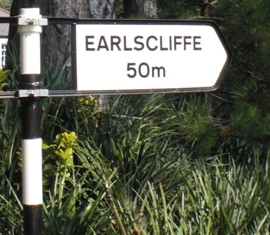 Back in 1995 and in 2018 when the warmest summers for many years had dried out the ground on the Eastern Hillside next to Earlscliffe, fire broke out clearing away a huge swath of gorse and bracken. This revealed row after row of 'lazy beds' where the Irish potatoes would have been grown, probably over a hundred years previously. Although it may seem like a distant memory today, it wasn't that long ago that cattle grazed at Earlscliffe.

Earlscliffe house was built around 1844 just before the Great Famine (or more politically correct, the Great Hunger*) on the hillside overlooking Doldrum Bay in an townland called Censure (Seinséar)**. At the time when it was built there were few other houses around, but the rail link between Howth and Dublin built around 1846 resulted in an increase in the local housing density.

Earlscliffe house was probably built as a summer residence purely for the stunning views over Dublin Bay and bathing in the local waters, and right up until the mid twentieth century, much of the land was farmed.

The following pages contain a short history of both the house at Earlscliffe and it's gardens, from the time the house was built, possibly by Alderman Cornelius Egan, to ownership by people such as Royal Navy Captain William Bunbury McClintock, Provost of Trinity, John Pentland Mahaffy, Dean of St. Patrick's Cathedral in Dublin, the Very Rev. C.T. Ovenden, and to when Dr. Ella Webb, Sir John Lumsden, and William Martin Murphy's grandson lived here. It will take us right up to the time of Dr. David Robinson and his family and the subsequent work carried out by the Robinson and Foley families to ensure that Earlscliffe remains a world renowned horticultural paradise.

* The Great Famine (Irish: an Gorta Mór) or the Great Hunger was a period of mass starvation, disease, and emigration in Ireland between 1845 and 1852. It is sometimes referred to, mostly outside Ireland, as the Irish Potato Famine, because about two-fifths of the population was solely reliant on this cheap crop for a number of historical reasons. During the famine, approximately 1 million people died and a million more emigrated from Ireland, causing the island's population to fall by between 20% and 25%. [Source Wikipedia]

Disclaimer. Parts of the data found in these history pages has been derived from sources currently available on the internet. In researching the previous owners of Earlscliffe, certain assumptions have been made as to the validity of this internet data. If you believe that some of this data is inaccurate, please contact  .