Earlscliffe was expected to sell quickly and for a large amount of money. However, this was the late 1960s, and big houses with labour intensive gardens were not that popular. This was fortunate for David and Muriel Robinson who had decided that this was the type of challenge they needed.

Earlscliffe with its five acres was ideal but it seemed inevitable that it would be beyond their reach. Miraculously, the large well-manicured garden intimidated would-be purchasers at the time. The house did not reach its reserve at auction and David and Muriel subsequently bought it for less than the asking price. [1] They moved into Earlscliffe in 1969.

For a discussion of how the Robinsons coped with the management of the large garden at Earlscliffe see:

When their children left home and Earlscliffe became too big for them, David and Muriel Robinson built a smaller house in the 1980s in the grounds of Earlscliffe in what was an orchard. They named it “Baron’s Brae” because a Baron is less than an Earl, and a Brae is a small cliff!

They later rented out Earlscliffe and the adjoining cottage and continued to manage the gardens.

Since the 1970s their have been many additional people who rented and lived at Earlscliffe or the adjacent cottage/mews. The following is a list of a few of them: 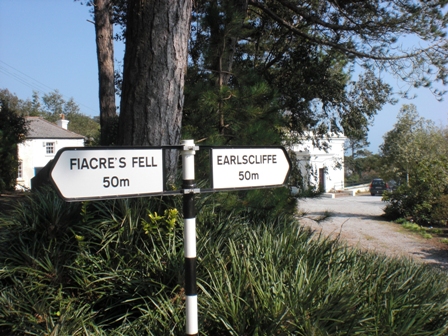 David Robinson's daughter, Karen, and her husband David Foley moved back to Earlscliffe at the end of 1993 and lived in an adjoining cottage.

They subsequently built a house adjacent to Earlscliffe which they called Fiacre's Fell.

They gave it this name partly because St. Fiacre is the patron saint of gardening, and a Fell is a sort of hillside.

However, the main reason they chose that name was that it is an anagram of Earlscliffe!

Earlscliffe House is now owned by David and Muriel's daughter, Karen, and the garden is managed with the help of her husband, David Foley, Karen's brother Ivan, and Karen and Ivan's family.

The following link displays a scrollable timeline related to the Robinson and Foley family, showing births, marriages, deaths and major events in their lives and in their home and working environments.


Disclaimer. Parts of the data found in these history pages has been derived from sources currently available on the internet. In researching the previous owners of Earlscliffe, certain assumptions have been made as to the validity of this internet data. If you believe that some of this data is inaccurate, please contact  .