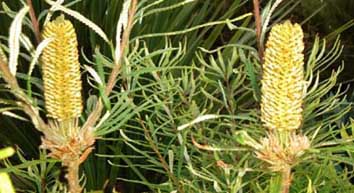 Banksia spinulosa var 'Collina' (the Hairpin Banksia) - a gift from the Abbey Gardens, Tresco, Isles of Scilly in September 1994 flowering in November/December 2000. This plant is a native of E. Australia where it also flowers in the winter. Many Banksia species will tolerate light frosts down to -7° C. As with closely related Protea, Banksia is unsuited to soil rich in nitrate and phosphate and does not tolerate simazine. [*]

At a time when other flowers are fading fast, Strobilanthes penstemonoides var. dalhousieana comes into its own in October and November. This is a plant of mountain forest in the Himalaya growing between 1350 and 3400 m. At Earlscliffe unripened shoot tips are killed back in the winter but the plant usually maintains a height at flowering of around 1.5 m. The plant illustrated is about 40 years old.

Psoralea pinnata (Blue pea) from South Africa. This beautiful small tree with softly pubescent white and violet flowers, provides a welcome cool colour in early July after the main flush of rhododendrons and azaleas is over.

Vireya rhododendron 'Tuba' (photographed May 2, 2000) in reasonable condition after three years out of doors

This web page was set up in May 2000, so there are no previous plants before this date.